Science Conference “Circumpolar Culture – the basis of the Arctic Civilisation” was held on the 5 th of December 2009. The initiative of holding the conference belongs to the senior lecturer of Sakha State University S. Protopopov, Arctic State Institute of Culture and Arts and  Saint-Petersburg Humanitarian University of Trade Unions. 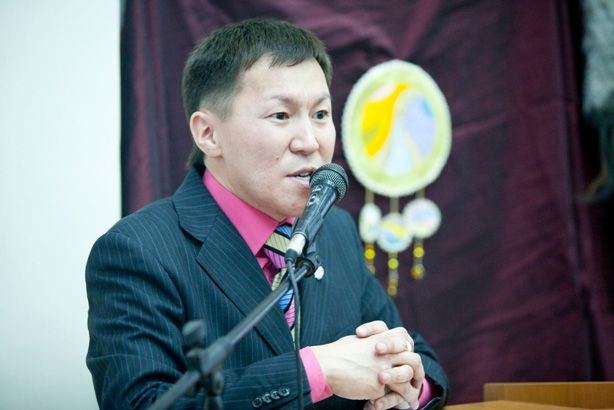 Semen Protopopov on behalf of the organizing committee congratulated the participants of the conference on the opening of the first conference “Circumpolar Culture – the basis of the Arctic Civilisation” .

The main goals of the Conference are the theoretical understanding and analysis of the content, structure and technologies of Circumpolar culture, the determining of the ways to preserve traditional cultures of the indeginious peoples of the Arctic. The conference was to join the efforts of the young scientists of the Republic Sakha.

The chair man of the Committee on the Problems of Arctic and indegenious peoples of the North V. Gubarev in his welcoming speech expressed the necessity of the conference and the expectations of the results of fruitful cooperative collavoration.

During the penal discussions the chair of the Department of Stylistics S. Vasilieva told about the actions taken to preserve the language of the Sakha in the century of Globalisation. The speaker expressed her hope that the conference is to find the new ways of preserving the language and culture of the indegenious peoples of the circompolar world.
Vice President of the State Institute of Culture and Arts, professor U. Vinokurova in her speech underlined the vital problems of the Arctic and the Sakha Republic. First of all these are the problems connected with the living conditions in the North, health, arctic civilisation, psychological problems and other questions as global warming and the problems of governing in the North.

The conference “Circumpolar Culture – the Basis of the Arctic Civilisation” worked in five directions:
- Conservation and development of the languages of the indigenous people of the North;
- Cultural wealth of the indigenous people of the North and Arctic;
- Circumpolar culture and new information technologies.
- Bio-geographical features of the processes of the circumpolar regions.
- Wellbeing of northern communities.
The conference was a great success. The students took active part in the work of the conference, presented their reports and asked a lot of questions.
In the frames of the conference there had been some exhibitions organized by:
-The Department of Folklore and Culture (Sakha State University) “Traditional sewing and embroidery of the Sakha people”
- The library of the Department of Folklore and Culture “ The Science and the North”
The results of the conference: 115 participants from 6 establishments of higher education of the Sakha Republic took part in the conference. Among them students, post graduate students, young scientists from the Arctic state Institute of Arts and Culture, Sakha State Agricultural Academy, Sakha State Pedagogical Academy, Saint-Petersburg Humanitarian University of Trade Unions (Yakutsk branch), Churapcha Institute of Physical Culture and Sports, Nerungry Technical Institute, Sakha State University.

The conference performed the fruitful exchange of experience among educational establishments of the Sakha republic. The participants underlined that Arctic is the unique natural and geographic, social, economic, cultural segment of the planet. The development of the Arctic depends on the preservation of ecosystem, support of the languages and dynamic development of traditional cultures.
The new concept of the Arctic development proclaims the unique natural economic and strategic value of the northern territories.
﻿
Tags: newsmember news