Arctic films in Iceland: "Indigenous stories have to be seen and heard"

The UArctic Thematic Network on Arctic Indigenous Film brought their work to new audiences in Reykjavík, Iceland as they introduced the world of Arctic films to attendees of the 2021 Arctic Circle Assembly, the UArctic Board, and invited guests.

The network’s panel discussion “The Arctic Goes to Hollywood and Cannes” featured in the main program of the Arctic Circle Assembly as a plenary session. Moderated by film commissioner Liisa Holmberg of the International Sámi Film Institute, the panel featured Anne-Lajla Utsi, CEO of the International Sámi Film Institute, Baltasar Kormákur Baltasarsson, film director and producer, and Laufey Guðjónsdóttir, director of the Icelandic Film Centre.

The panel focused on the Arctic film industry, especially the importance and meaning of local film industries to the peoples of the Arctic, and Arctic Indigenous film making. Variety and inclusion are now high on everyone’s agenda, and Arctic Indigenous peoples have received their own share of the attention. For example, when making the hit movie Frozen 2, Disney collaborated with the Sámi to ensure respectful and accurate representation of their culture. Anne-Lajla Utsi was one of the collaborators, and while the end result was a success on both sides, as she pointed out in the panel, representation is just a starting point. “It’s important to have Indigenous peoples in key creative roles – producers, directors, script writers – in order to have our own voices out there. Not just films about Indigenous peoples, but films from Indigenous peoples.”

The production of Indigenous films and series is growing, along with their international success and recognition, but developing Indigenous film industry across the North is a process that takes time as well as resources. “Arctic Indigenous film professionals need funding for their productions, marketing to promote the films, and of course relevant education,” Liisa Holmberg summarized the key needs.

The International Sámi Film Institute works hard to create support mechanisms for Indigenous film makers. One of their bigger initiatives is the Arctic Indigenous Film Fund AIFF, a trust foundation established in collaboration with Sundance Film Institute, Canada Media Fund, Nunavut Film Development Corporation, Film.GL Greenland Film Makers, and Sakha Film in Russia. AIFF aims to not only fund film projects, but also to promote and unify Arctic Indigenous film makers, provide the best possible education for them, and build competence and collaboration. “Indigenous peoples create their own future with telling their own stories. That is why we need AIFF,” Holmberg stated.

Speaking from experience, Baltasar Kormákur also emphasized gaining access to bigger platforms, not just smaller film festivals. “If Indigenous films are about telling the stories of Indigenous peoples, they need to be available where the bigger audiences are. That way you will be heard and seen, and your culture will be recognized in a stronger way. And I would be glad if I can help with that.” 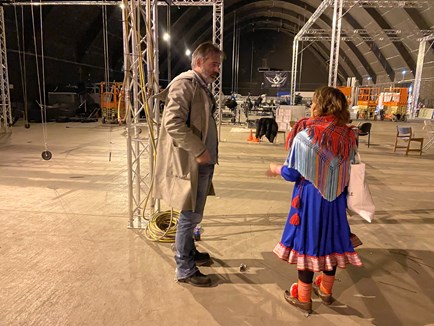 “Together we are stronger,” Utsi concluded.

Arctic Indigenous Films is a UArctic Thematic Network led by the International Sámi Film Institute (ISFI). ISFI is dedicated to providing Sámi people with the skills and economic opportunities in developing, producing, and distributing Sámi films in the Sámi language. The Institute is based in Guovdageaidnu (Kautokeino), Norway.

To learn more and to support the Arctic Indigenous Film Fund, visit www.aiff.no

Main photo copyright: The Arctic Circle, under CC BY 2.0 (link to original)